I’ve been unpacking – I know I landed back in the UK nearly 2 weeks ago, but it’s quite difficult with one arm in a sling – and I found this. It is (half of) one of my beautiful shirts, which was cut from me after I broke my collarbone. It was too difficult to bend my arm out of it.

Anyone who has been to my house knows that it is the smallest in the world, a tiny Victorian cottage, where any spare space is taken up with bike kit. You can’t get through the front door without tripping over something. And now I have a dilemma – where am I going to store all this stuff I’ve amassed for RAAM? There are currently amber lights on my kitchen worktop and I need new wardrobes for clothes.

Shusannah Pillinger talks about the kit she wore in her 2014 Race Across America attempt:

Carvalhocustom were kind enough to provide me with the bespoke kit for RAAM – 10 pairs of shorts, 6 short sleeved tops, 5 long sleeved for various weathers, a gilet, leg warmers and the crew favourites – the star-spangled booties. I’d like to write something about this. In Race Around Ireland, we muddled along with bits and pieces of kit I had accrued over years of commuting. It all got drenched and became the crew’s biggest (smelliest) nightmare. We were all so happy when Nicole from Carvalho approached us in Ireland and said they’d like to support me.

Fast forward to RAAM and the change was remarkable. Gone was the kit favouritism (I liked one pair of my old shorts, that ended up always being “in the laundry”) and having to layer to get comfortable. Now, I felt like a professional in my custom kit. I’d been training all winter in the shorts (and windproofs) and knew they were going to be awesome, but I couldn’t predict what would happen after 12 days of cycling. In the end, I only had 9 days to test them in the race, but I can report a great experience. No saddle sores, just minor, but treatable abrasion – partly caused by an unexpected gear change! In addition the crew were able to choose when to change my shirts and jackets, from the excellent range we had. They didn’t need to ask me what I thought would be best – just one less thing to think about.

I don’t know if Carvalho kit has ever been used in this manner – but I cycled many miles with handfuls of ice stuffed into my back pockets, near my kidneys. Along with the predominantly white colour, this saved me from heat exhaustion in the desert and through the unexpectedly hot Kansas and Missouri. The shirts dried in no time – I need to test them in Ireland now! 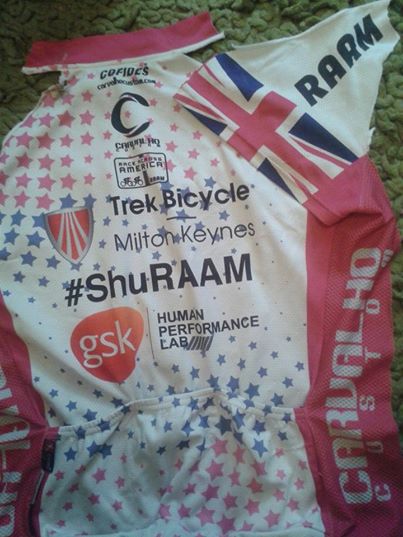 I hope you agree the kit looked great too (although maybe not my severed shirt). Thanks to Eldon Costa for the design. I can’t wait to get back out on the roads in it – and maybe you guys will see it again soon!